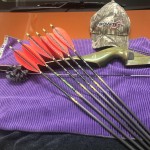 The laughing kookaburra (Dacelo novaeguineae) is a bird in the kingfisher subfamily Halcyoninae. It is a large robust kingfisher with a whitish head and a brown eye-stripe.[2] The upper parts are mostly dark brown but there is a mottled light-blue patch on the wing coverts.[3][2] The under parts are cream-white and the tail is barred with rufous and black.[2] The plumage of the male and female birds is similar. The territorial call is a distinctive laugh that is often delivered by several birds at the same time, and is widely used as a stock sound effect in situations that involve a jungle setting.[4]

The laughing kookaburra is native to eastern mainland Australia, but has also been introduced to parts of New Zealand, Tasmania, and Western Australia.[5] It occupies dry eucalypt forest, woodland, city parks and gardens.[5] This species is sedentary and occupies the same territory throughout the year. It is monogamous, retaining the same partner for life. A breeding pair can be accompanied by up to five fully grown non-breeding offspring from previous years that help the parents defend their territory and raise their young.[5] The laughing kookaburra generally breeds in unlined tree holes or in excavated holes in arboreal termite nests.[5] The usual clutch is three white eggs. The parents and the helpers incubate the eggs and feed the chicks. The youngest of the three nestlings or chicks is often killed by the older siblings. When the chicks fledge they continue to be fed by the group for six to ten weeks until they are able to forage independently.[6]

A predator of a wide variety of small animals, the laughing kookaburra typically waits perched on a branch until it sees an animal on the ground and then flies down and pounces on its prey.[3] Its diet includes lizards, insects, worms, snakes, mice and it is known to take goldfish out of garden ponds.

The International Union for Conservation of Nature (IUCN) has classed the laughing kookaburra as a species of least concern as it has a large range and population, with no widespread threats.[1]

Promoting Peace and Well Being Daily